World’s End Club: Here’s What Comes in Each Edition – IGN

World’s End Club: Here’s What Comes in Each Edition – IGN

World’s End Club is coming to Nintendo Switch on May 28. Two editions of the game are available for preorder right now from a handful of retailers (see it at Amazon). Read on to find out what the game’s all about, as well as where you can snag a preorder and what comes in each edition.

Despite being called a “deluxe edition,” this is the entry-level version for those who prefer physical games. (It’s not up for preorder in digital format yet). The deluxe edition comes with the game itself, plus the following extras: 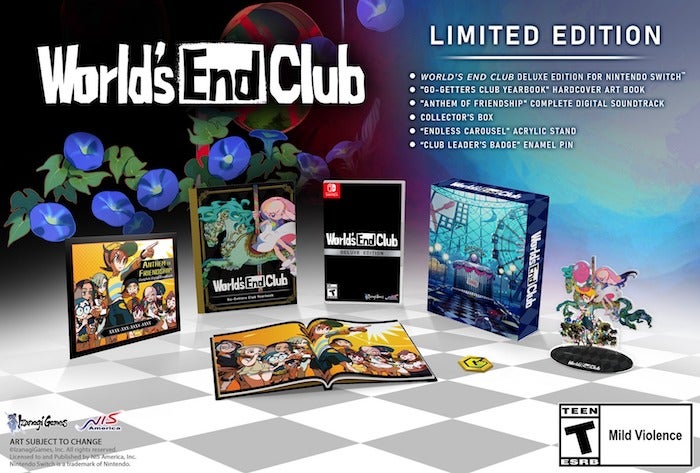 The game is also available in a limited edition that’s exclusive to the NIS America Store. It comes with the game itself, along with the following items:

No preorder bonuses have been announced for World’s End Club the time of this writing. If that changes at any point in the future, this is where we’ll toss that information.

What Is World’s End Club?

A mix between a visual novel and a platformer, World’s End Club comes from the creators of the cult classics Zero Escape and Danganronpa. It’s about a group of oddball students from all over Japan who call themselves the “Go-Getters Club.” They go on a field trip to an underwater theme park but, due to some unfortunate events, find themselves trapped there. Then a clown appears and informs them that they’ll have to play a “Fate Game” to escape. Sounds dangerous. Once you do escape, you end up going on a cross-country adventure to solve yet another mystery.

The first portion of World’s End Club was originally released last year as an Apple Arcade title. That version of the game should be getting a content update with the ending around the time of the Switch version’s release.