A scarecrow is a creation built to deceive. A visual signifier of something greater. A simulacrum intended to impress, but when approached, the illusion shatters. Conveniently, Stitchy in Tooki Trouble is much the same. At first glance, it’s a rather attractive pillaging of Donkey Kong Country Returns, borrowing the visual style and Tiki-themed aesthetic for a rollicking 2D adventure in the tradition of Retro Studios’ greater apes. Then you start playing and it rather falls apart.

In this facsimile we have stalks of corn in place of bananas, Tooki statues in place of puzzle pieces, and stilted, uninteresting level design in place of magnificence. Stitchy can walk, double jump, and ground pound. That’s it. You use said ground pound to smash boxes open, but even when they’re stacked up atop one another you can’t simply smash through the lot in a satisfying bout of carnage, à la Crash Bandicoot; you’ve got to laboriously stomp them all individually, for some reason.

Yes, that probably seems like quite a minor thing to pick on, but what can we possibly say about this game? You’ve played it before, a million times, and probably on your phone. That’s not a slight against phone games, but the familiar structure (ranking each level out of three stars?! Why, such a thing has never—, etc), simplistic level design and ultimate lack of real excitement calls to mind the sort of thing you download for free in a promotion, play once, then sack off for more Candy Crush, or whatever the kids are playing on their phones, these days. *Shakes fist at the modern world* Stitchy in Tooki Trouble isn’t a bad game by any means – well, actually, that depends on your perspective. Something that’s technically solid but doesn’t impress or surprise in any way is, we’d argue, a good deal less interesting than a truly awful experience. Stitchy falls right into the safest possible shape of a 2D platformer. Little challenge, little intrigue, but technically it’s an impressive-looking and feeling game, running at 60fps with bright graphics that really pop off the screen even in handheld mode. But in service to this — a platform game that’s less imaginative than Bloo Kid 2 — it doesn’t really amount to anything consequential.

Coming on the heels of Kaze and the Wild Masks (another game that takes inspiration from Donkey Kong Country) does Stitchy in Tooki Trouble even fewer favours. Despite some moments that are superficially interesting, such as an early level that sees you dealing with rolling waves creating a high obstacle to plan your advance around, the game doesn’t really do anything with its gimmicks, opting instead for banal, samey stage designs that basically don’t do anything to either thrill or offend. The world’s slowest, easiest mine cart stage. A level when a mechanical octopus attacks from the background with its tentacles. Then a languid, simplistic boss battle with said cephalopod.

And it’s… fine, we guess. It’s the kind of title that’s really, really difficult to review because there is nothing new to say about it. No enthusiasm. No real ideas. You play as a scarecrow; how about some sort of gimmick involving, you know, crows? Maybe a flutter jump using crows perched on your arms. Something. Anything! 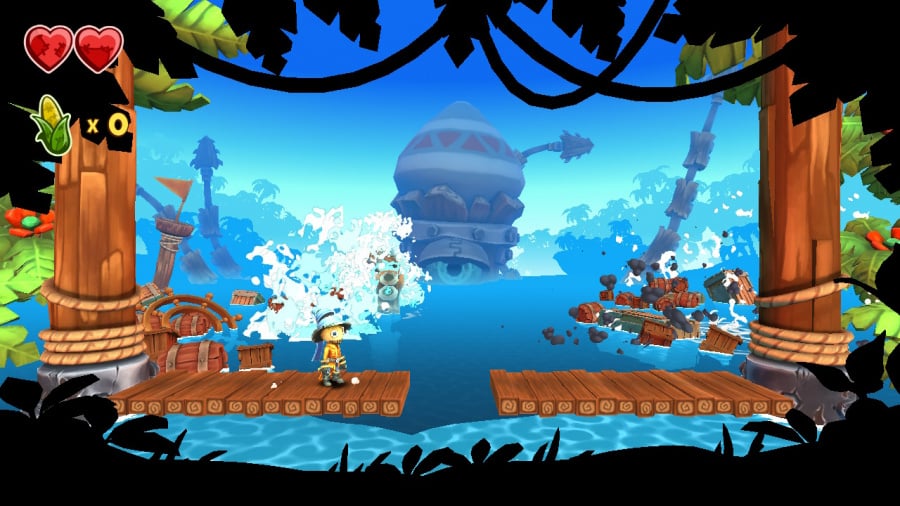 But there is nothing. Get three items, get to the exit. Rinse, repeat. The juxtaposition of the Shin’en-esque level of graphical polish and the sheer repetition and uninspired slog of the gameplay never ceases to be jarring. As we said, it’s not bad. There’s just absolutely no reason to play it when so many other more interesting (and often cheaper) platformers are available. The controls are responsive (though “Jump” is on the ‘A’ button), the visuals are perfectly pleasant and the soundtrack gets the job done. It’s a meat-and-potatoes platform game through and through, but it fails to find a real identity or reason to exist.

Imagine Donkey Kong Country with none of the flair, none of the momentum, none of the secrets, none of the style and none of the grace. It doesn’t even have a funny face. There’s very little to get your teeth into here, though die-hard platform game fans may get some measure of satisfaction from its limited, low-risk take on the genre. We must reiterate – Stitchy in Tooki Trouble is not a badly-made game, it’s just a relentlessly unimpressive one that offers nothing new or even any kind of twist on an existing trope or mechanic. A sequel to Stitchy that perhaps saw fit to include something — anything — to make the game stand out, that could marry its impressive visuals with similarly good level design… now that would be worth a go. As it stands though, this scarecrow excels its most famed pop-culture analogue by lacking a brain, a heart and any courage to speak of.