After months of the community asking for character outfits, Genshin Impact is finally getting a skins system to give characters a brand new outfit. This system is being introduced in the Genshin Impact 1.6 update, which also welcomes the Anemo Sword user Kazuha to the game. We also believe Ayaka, a Cyro Sword user, could be coming to the 1.6 update after Kazuha’s release.

One of the big questions surrounding the skin system was how skins were planned to be distributed. As Genshin Impact locks characters behind gacha mechanics, players were worried that skins may be sold using the same system. The 1.6 livestream revealed two methods for unlocking skins: purchasing them outright, and exchanging them for specific items collected during an event. If you happen to miss the event, the skin will make its way to the Character Outfit Shop in the future.

This is only the beginning of the skin system, so don’t feel bad if your favourite character doesn’t have a skin just yet. We fully expect the devs to include new skins with every update from now on. Here are all of the Genshin Impact outfits so far.

The first purchasable outfit in the Character Outfit Shop is Jean’s Sea Breeze Dandelion outfit for 1680 Genesis Crystals. This will set you back £29.99 / $29.99 / €32.99 if you purchase the bundle containing 1980 Genesis Crystals. During Genshin Impact 1.6’s launch period, Genesis Crystals will be available at a 20% discount. You can save money by purchasing Jean’s outfit during this window as it’ll cost 1350, saving you 330 Crystals. 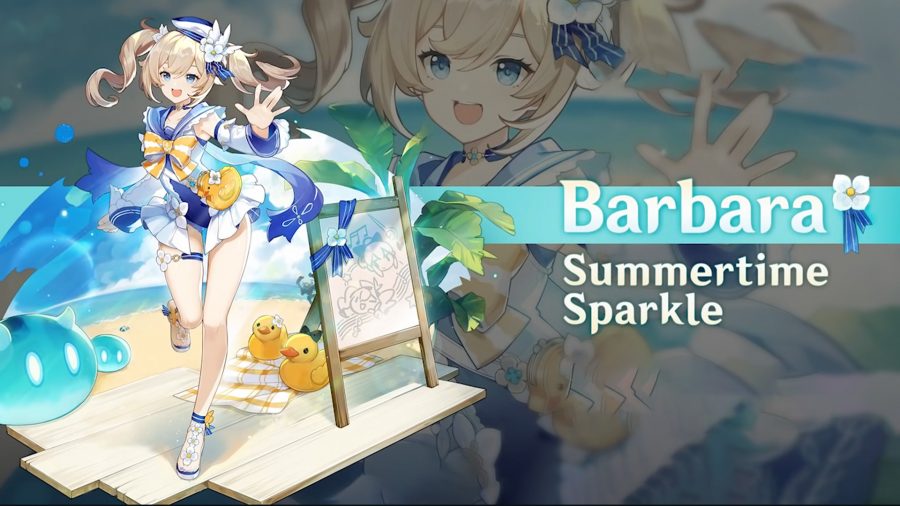 Barbara’s Summertime Sparkle outfit will be temporarily free during the Echoing Tales event. To unlock the outfit, you must collect 24 echoing conches during the event. Check out our Genshin Impact Echoing Tales event guide which highlights the locations of all of the available echoing conches. Be sure to collect all the shells in order to receive other rewards, including mora, primogems, and more.

Limited time events like Echoing Tales may feature exclusive skins, but eventually these skins will join the Character Outfit Shop. The developers stated Barbara’s Summertime Sparkle outfit will be made available “in future versions”.

And that’s all there is to know about the skins system in Genshin Impact. Stay tuned to this page as we’ll be updating it as more skins become available. In the meantime, head over to our guide to find out more about the Genshin Impact banner release schedule. We also have an up to date Genshin Impact tier list if you want to know how powerful your party is.