So, you’re looking for some EU4 cheats, are you? Perhaps you’ve also seen our Victoria 2 cheats guide, or maybe our primer to Hearts of Iron 4 cheats? Paradox grand strategy games are big, complex, and they can last a long time. Things can also go very wrong – so wrong that not evening save-scumming can help you – so you may find yourself in a need of a helping hand.

Like most games, Europa Universalis IV has an in-game console that allows you to input commands to achieve various effects. EU4 especially is a mature and quite intricate strategy game, with a myriad of goals you might need help accomplishing that may require targeting at province, or even country level.

We’ve put together a guide to cheats and console commands in EU4. Unlike similar articles we’ve done for other grand strategy games, we’re not going to print the full list of commands available. A full list is available here if you want to look at it. We’re also going to give a shout out to Strand, whose excellent Steam guide provided a basis for our own text below.

First things first, it’s worth noting that the in-game console is disabled if you’re playing in Ironman mode. This is because achievements are only available in Ironman, and since pretty much using any console command are considered cheating, it would skew the achievement data.

Assuming you’re not playing in Ironman, you can access the in-game console by pressing the tilde key, which is usually ` or ~ on most English keyboards. Common commands you might consider using include:

And there are plenty more as well.

Many console commands, like those mentioned above, require you to specifically target a province in order to apply the effect. If you want to use a command on a country that’s not your own, you’ll also need to specify which one. Not specifying means that the effect will default to the country you’re controlling. 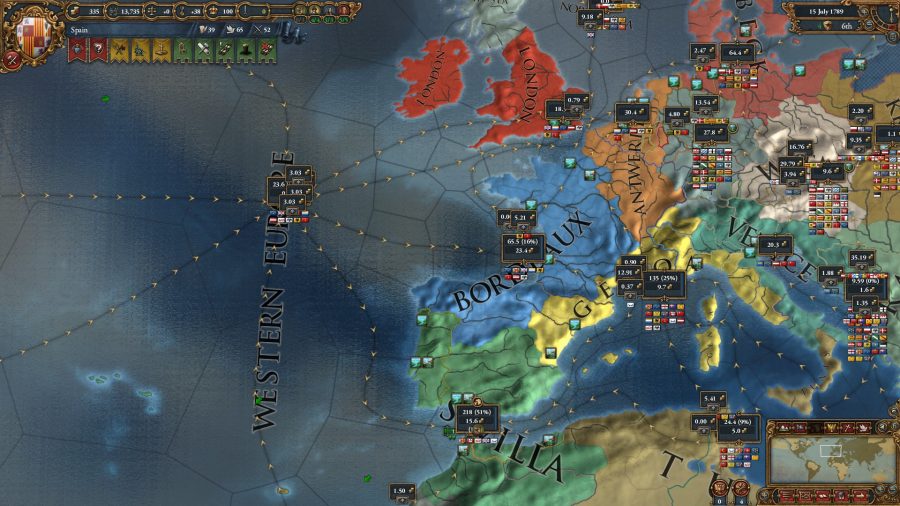 This means you’ll need the province ID and/or the country tag. The list of potential tags is pretty exhaustive, so the easiest method is to type debug_mode into the console, and then however over a province. It will give you both the province ID of that specific location, as well as the tag of the owner. Make sure you make a note of a few tags you’re interested in for reference later.

Incidentally, typing the tag into the console will instantly switch you to being the controller of that nation.

Europa Universalis IV has plenty of events that can trigger, more so than the likes of Victoria 2 since it had far more DLC support than the older game. There are hundreds of events of varying types, and you can consult a more complete list here.

To use events, simply type ‘event’ into the console, followed by the event name or ID. If a province or country tag is needed (see above), type that in also at the end of the command.