During the livestream held this week by Zenimax, they announced an enhanced version of The Elder Scrolls Online would be coming to next-gen consoles Playstation 5 and Xbox Series X|S coming this June.

The live stream which was held this week on March 31st, the Elder Scrolls Online development team shared news about what’s to come with the next expansion Blackwood. There was also further news about a graphics upgraded version coming to consoles Playstation 5 and Xbox Series X|S on June 8th.

The enhanced version will take advantage of the new-generation console tech, improving both game visuals and performance on both consoles. All ESO players will have access to the Console Enhanced version upon purchase and those who already own ESO will gain a free upgrade. So in short, all you’ll need is to own ESO and either an Xbox Series X|S or Playstation 5 to enjoy the stunning new upgrade.

The enhanced version will include 60FPS support while running in “Performance Mode”. Previously the console version was capped at 30FPS. There are also improvements to draw distance, letting you see more while exploring than before, and unlocked textures with high resolution, making things look even better on larger screens. 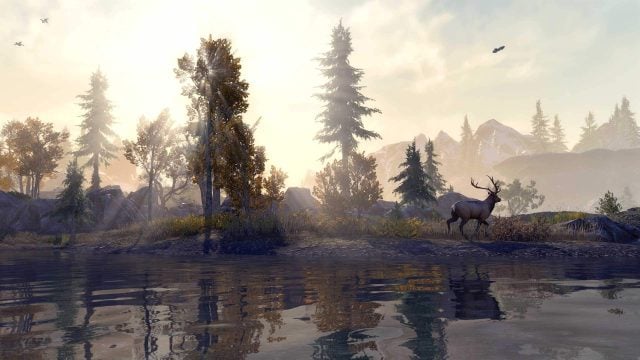 Other improvements include updates such as antialiasing, improved reflections, improved ambient occlusion, improved shadows, improved depth of field, and improved loading times meaning you will be able to get into your adventures faster than before. The loading times have been cut by nearly half on average according to the official Elder Scrolls Online website.

But more details are to come about Performance and Fidelity Modes, and how players can get their hands on it when it launches on June 8th.

Don’t forget if you’ve ever wanted to check out ESO but weren’t sure whether to take the plunge, you can now play free until April 13th on all platforms. You’ll have access to the base game and Morrowind adventure.

The Elder Scrolls Online: Console Enhanced will launch on Xbox Series X|S and Playstation 5 with Update 30 on June 8th.

2021-04-03
Previous Post: Final Fantasy Creator’s New RPG Is Out And Painfully Pretty
Next Post: Stock up on These Classic JACHS NY Sweaters While They’re up To 90% Off