Wizards of the Coast have announced the Dungeons & Dragons: Dark Alliance co-op Action-RPG will be releasing this June.

A new trailer has dropped for upcoming D&D Dark Alliance, an Action-RPG set to release on PS5, PS4, Xbox Series X|S, Xbox One and PC on June 22nd 2021.

Dark Alliance is the reboot of the classic Dungeons & Dragons roleplaying game, but this time take over the shoulder approach rather than top down. The game sets to get players right into the action, with up close combat and as well as ranged weapons. At the beginning according to an interview with IGN, the developer wanted to create a game similar to Diablo, a top-down hack and slash but the concept started to change according to creative director and co-founder at Tuque Game, Jeff Hattem:

At that point it was a top-down, action RPG. You would gather up with your friends, you would smash monsters, grab loot, and progress, but it was missing something. It wasn’t taking the characters, taking the Forgotten Realms, and rendering them to the level of fidelity that I wanted as a player.

In an interview with Polygon, Hattem also shared that Dark Alliance will have 21 missions, each taking between 20 to 25 minutes to complete in group co-op. For single-player, it will take 40 minutes or more for each level. Hattem explained the game focuses on replayability, having players challenge themselves with higher difficulties and to gain better Armor and gear. With different gear sets to collect, granting bonus perks with three, five and eight item sets.

Players will gain 10 character slots that each progress individually rather than account-wide, meaning players can build their character to fill their party of four characters along  the different skill trees available. Currently, each character has 50 combat abilities, so that’s plenty of choice in terms of abilities to master.

Gameplay offers all the button mashing you could want, but also offers an experience that lets players master both the strengths and weakness of each attack, ability and combo. You can apply guard breaks, team attacks and pull off executions.

As for the future, it seems the developer is open to adding more content, Hattem shared this could include further maps and gear if players are keen: 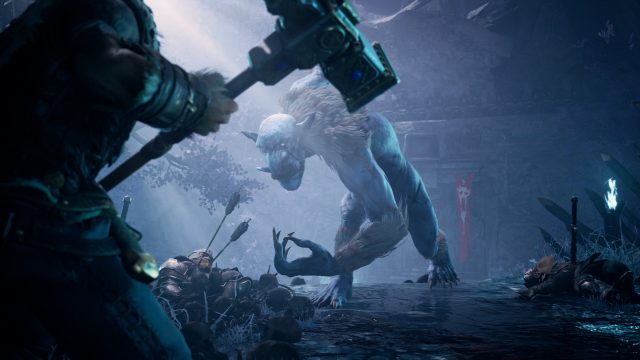 As for where the game stands in terms of the lore timeline, it is set 100 years earlier than the events that take place in the tabletop, acting as a prequel of sorts:

From a lore standpoint it’s set about 100 years earlier than the events unfolding in the tabletop experience, so it’s sort of a prequel in a certain way. […] So we’re not necessarily directly tied to what’s happening in the tabletop but, as you can see, their Rime of the Frostmaiden is in Icewind Dale and there’s a lot of like overlap between the two products.

For more news be sure to check out more RPG news in Gothic Remake New Details and Outriders Will Launch On Xbox Games Pass.